There exists out in the ether, the concept of “fun.” Having fun for most of us is playing, coaching, talking, or watching lacrosse. For the latter, that concept is sometimes muddled by allegiance to a particular school or region. This article isn’t for you. It’s for the true neutral and chaotic good alignments only. Check your manual for details. This is for the people who just want to see teams that play with joie de vivre. Teams that play fast. Teams that hit hard. Teams that don’t care about your feelings and definitely don’t read the message boards. It’s not about wins or even being “good” in the traditional sense.

This is a ranking of the most fun teams to watch in each division of men’s lacrosse in 2021. So far. DIII fans — a special DIII edition is coming, too.

Did the Scarlet Knights fall in dramatic fashion to conference rivals Maryland last weekend? Yes. Did they also produce the most exciting first half of any game at any level so far this season? Also yes. Here’s what you get when you sign up for a Rutgers game: You get aggressive dodging, power shooting, and clever off-ball finishes. Connor Kirst, Adam Charalambides, and Kieran Mullins are three of the most exciting players in college lacrosse for completely different reasons. They are the show, but the opening act is a physical and punishing defense that —when it’s clicking— is a real throwback to a 1990s check-happy wonderland.

Rutgers has historically been the overlooked team in the Big Ten. Penn State, Ohio State, Johns Hopkins, and Maryland always get more coverage and column space than the state University of New Jersey, but that should change going forward. The two state teams have stumbled on their own and OSU flat-out imploded against Rutgers earlier this season. Quick offense, a willingness to get forward to push the break and no fear of failure have made the Scarlet Knights are appointment viewing in 2021.

Next Must-See Game: March 28 — A rematch with Maryland, this time at home with the surviving cast of “The Sopranos” in attendance. 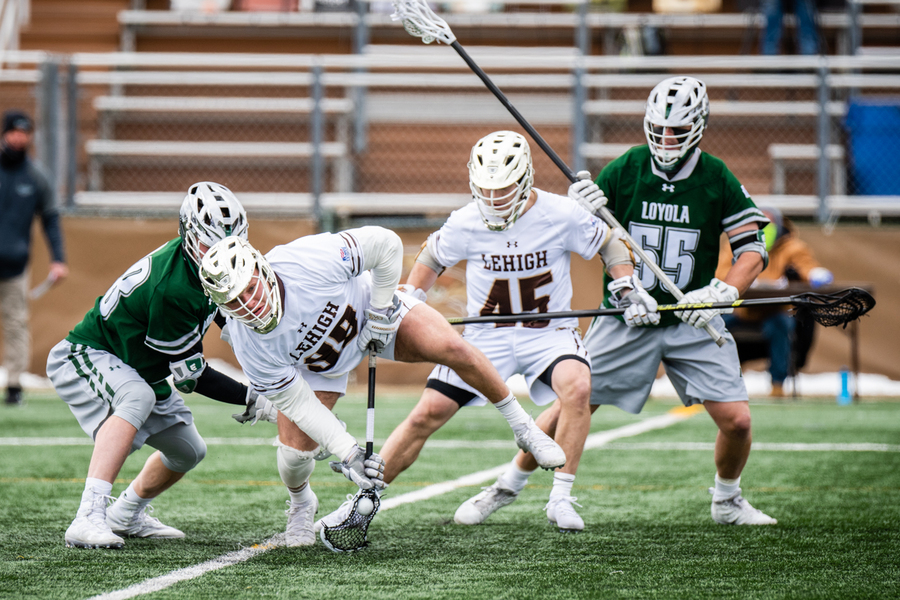 Here’s why Lehigh is fun to watch: His name is Mike Sisselberger. The Siss is the most electric face-off man in the game right now. He’s not just technical; he’s diabolical. It’s very hard to wrongfoot the Mountain Hawks if you’re constantly losing draws to them. It’s also tough to put up a fight when Lehigh throws waves of midfield lines at you and runs its offense through multiple players. Two of their top three scorers are sophomores (Christian Mule and John Sidorski) and there is even more young talent coming off the bench in freshmen Scott Cole (Reisterstown, Md.) and Quinn Armstrong.

The Patriot League is a brutal proving ground, and the Mountain Hawks have lived most of their lives in between the margins of the Loyola’s and Army’s of the world. Well, they have already exorcised one of those demons; next up are the Black Knights.

Next Must-See Game: April 3 — Army at home in a game that will surely confuse colorblind people.

You saw this coming if you have been able to catch the Pioneers at any point this season. They run creative pairs sets and spin the ball through X like it’s on fire. They just beat previously undefeated Georgetown like they stole candy from a gas station, 13-7, to re-establish themselves as a top ten team. To those that saw fit to remove them from the national conversation, I present to you the multi-faceted and developed players as tribute: Jackson Morrill, Ethan Walker, Jack Hannah, and Danny Logan. Things are about to get even more explosive in the mountains with the addition of TD Ierlan on the horizon as well.

The Pioneers are the kings of Big East after slaying nearly every beast thrown at them so far. An early trap game against Utah — that they narrowly escaped with a victory— and losses to national powers Duke and North Carolina poisoned the nationwide audience, but to those that have been lucky enough to catch Denver’s glow up, your attention will be rewarded sooner rather than later.

This is not a surprise for anyone that is even tangentially connected to the DII scene. The Bears score at just a flat-out blistering pace when given multiple possessions in a row. And by given, I mean self-generate because their 10-man ride game is very strong as is their attackmens’ work ethic. Having a showrunner like Eric Dickinson, who is the team’s leading scorer despite missing games early on in the campaign, paired with a top-tier finisher like Myles Moffat has made the Bears the talk of the DII landscape. The emergence of Bryce Reese as a dodging option out of the midfield has made an already menacing entity that much more robust.

To top it all off, Noah Johnson is one of the best —if not the best— goaltender in DII. He makes crazy stops with all parts of his body and bombs outlets past half field with regularity. Don’t run a full press ride against the Bears; they see it every day in practice and they know exactly how to attack it with a long pass to a cross-field pass and an easy goal.

Next Must-See Game: April 7 — against an angry Wingate team that lost to Queens last week.